The thırd unıque campaıgn "Dream with Ucell!" was as always held in one breath and it was full of positive emotions as the program presenters – Yevgeniya and Axror as well as the guests of the campaign were. One of them was a winner of the Second draw game and became an owner of UZS 50 mln – Latipova Mahbuba Habibullaevna from Namangan city. 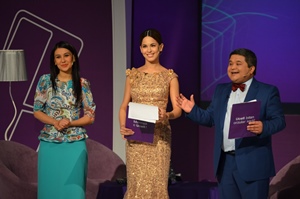 With hardly hiding her excitement Mahbuba Habibullaevna expressed her gratitude and said that her dreams were coming true with Ucell!

Latipova Mahbuba, a winner of the Second draw game: 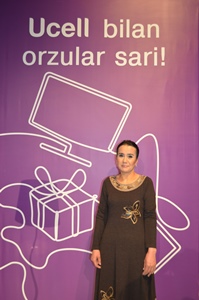 "I express my thanks to Ucell for that I can realize my dream. I live with my three doughters in Namangan city and now I have an opportunity to prepare for the most beautiful wedding parties for each one as it is a tradition in the Oriental countries".

On live program of "Yoshlar" at 20:20, 2 013 571 subscribers participated and from them the next eight winners were defined. 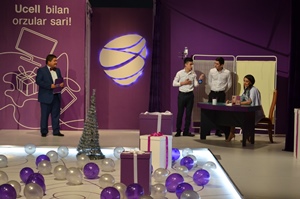 And teh second guest was the actress and unbelievable positive person – Dilnoza Kubaeva who defined teh winner of the third draw game – onwer of UZS 50 mln and otehr 7 prize winners via taking out tickets with the subscriber numbers from teh drum.

When Dilnoza was asked what she was dreaming to become, she said 'Doctor".
And for some moments her dreamcame true with Ucell, may be for some minutes, but Dilnoza could be in the role of eye doctor. Dilnoza says that the next year the roles in medicine will have the priority for her.

Don’t miss the next draw game with the next star whose name we for the time keep in secret! 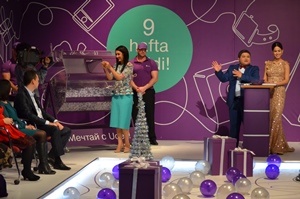 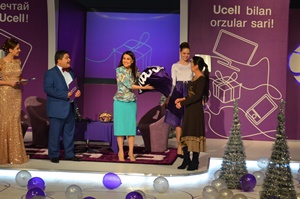 We have 8 week left before the main prize drawing and soon we can know about Surprise!

We remind you that 2 numbers of the telephone number are hid intentionally just to protect Winners from unwanted calls. After draw game employees of Ucell contact with the prize winner subscribers and inform them where and when they can get their prizes.

Dream with Ucell and Your secret dreams will come true!

Conditions of participating in campaign

Happy New Year and we wish You and Your close people good health, cheer, welfare and happiness! May Your dreams come true in 2015!